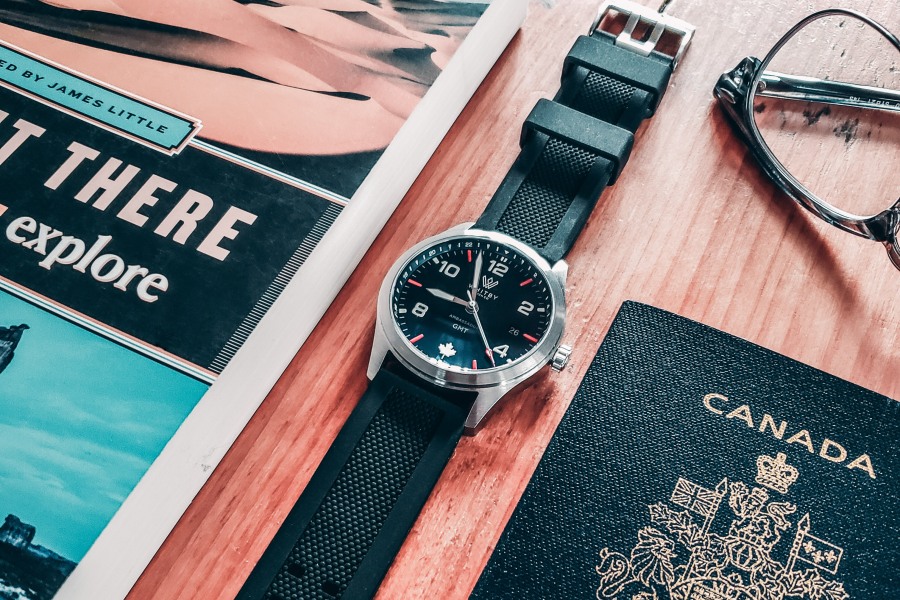 When I was 18 years old, I left the little town of Carleton Place, Ontario to backpack through Europe. It was 1991; there was no Internet. The Berlin Wall had just come down, Eastern Europe was opening up. I had a battered copy of Let’s Go Europe (several years out of date), a standby plane ticket, and a Flexi-Rail Pass. I had no set itinerary and no fixed return date. It was the adventure of a lifetime.

The Whitby Watch Co. is hoping to recreate that same sense of bold exploits and fun with their new Ambassador line of GMTs. Building on the success of their Arrow and Avro Pilot mechanical watches, Whitby have created a more entry-level offering which will no doubt satisfy even the most ardent watch enthusiasts.

The Ambassador takes its lead from the Flieger tradition which put the Whitby Watch Co. on the map, but then banks hard right with more contemporary design cues. The lovely sweep of its traditional stainless-steel pilot-style case offers a choice of modern updates: a brash brushed silver or a deep black PVD.

The dial, too, has youthful appeal with distinct, thick sword hands and a red-tipped GMT indicator that picks up the matching red pip in the chapter ring. The four different colourways demonstrate real thought. There are playful uses of red and blue (Seafarer), but also a tastefully subdued grey (Steel). The Black Gold combination finds itself somewhat in between with a traditional black dial and bright red hour markings. However, the jade hues of the Aurora might be the most unique dial choice. I hesitate to call it sunburst, as it really recalls surfacing toward light from deep waters.

The dial uses a mixture of baton indices and block Arabic numerals, but the chapter ring around the outside offers an unobtrusive 24-hour clock to compliment the GMT function. This latter complication sets the Ambassador above the norm, providing character and purpose to an otherwise straightforward design. With the Ambassador, you would be able to track the hour back home as you skip over time zones. Or perhaps, you might day-dream about the comings and goings in the locale of your next journey as you pine away back home between trips.

To complete the aesthetic appeal, this watch sports a dive-style rubber strap. At first, this may seem at odds with its clear nod to the pilot watch heritage, but in fact, I can’t imagine a better strap choice. With its 100 metres water resistance, tough build, and GMT function, this watch has the makings of a “go everywhere, do everything” beater.

To run the Ambassador, Whitby have chosen the workhorse Swiss Ronda Calibre 515 with 45 months of battery power.  These movements are also found in watches by Luminox, Victorinox, Shinola, and Linjer.

Unlike a lot of entry-level offerings, which are built offshore, the Ambassador is designed in Canada and assembled in the USA. This makes the Ambassador an astonishing value proposition at only $339CAD (that’s less than $270USD!). And as though this weren’t enough, the special launch price for the Ambassador has been set at $299CAD (or approximately $230USD).

All Ambassadors come with a zippered double-watch case.

The Ronda Powertech 515.24D is an accurate and reliable movement, but a 45-month battery charge is not long. The 715 is 60 months and the 715Li offers 10 years! Frequent battery changes over the lifetime of a watch can add to the possibility of water-resistant seal wear or damage. That being said, the added bonus of a GMT function at this price point is hard to argue against.

A GMT with an accurate Swiss movement at this level of fit and finishing for the starting price of $230USD…what’s not to like? The Ambassador has a lot of stage presence; it’s an attractive, well-designed watch. And, more importantly, it’s built tough. A lot of sound design decisions (materials, colours, strap choice, etc.) have converged here to create a striking everyday watch. It’s slim enough to fit under the cuff of a work shirt, and its water resistance means that you won’t have to worry about transitioning from the office to the lake on the weekend. It’s the sort of sturdy watch I could have worn as I traipsed across Europe all those years ago.

3 thoughts on “Off the Cuff: The Ambassador GMT by Whitby Watch Co.”