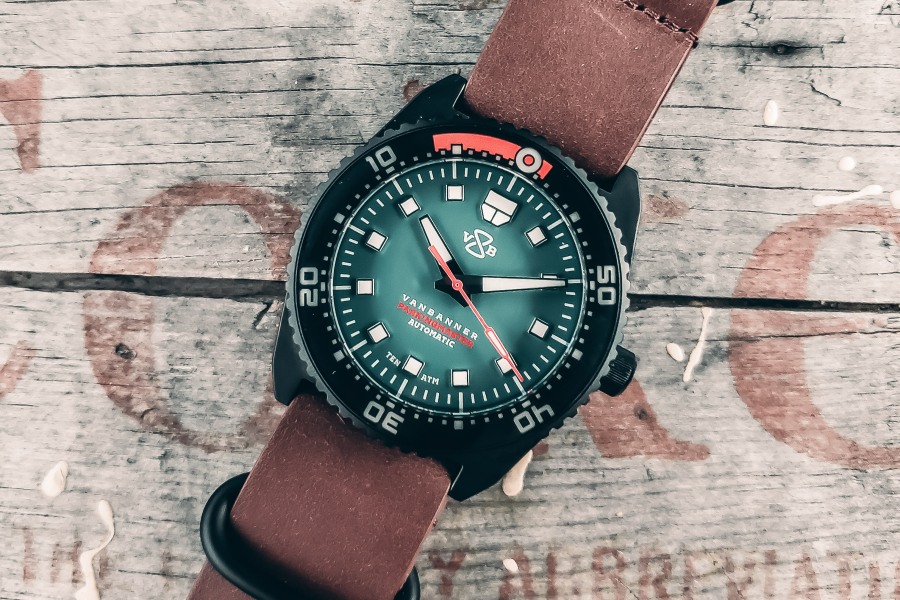 Some watchmakers embody the microbrand spirit more than others–that bold, “go your own way” attitude. Some live it. And some call their watch the “Parkingmaster.” That’s some next level sh*t. I mean, what could be more audacious than channelling the glory of the “Seamaster” or the “Marinemaster” and then slapping you with a watch that is meant to time your parking meter?

I think it’s time you met LV. LV runs a reputable printing business (VanBanner) in Vancouver, BC that took a few hard knocks during the early days of COVID-19 shutdowns. But like all successful entrepreneurs, LV regrouped and came out swinging. The Parkingmaster is his sly three punch combo.

To begin, the Parkingmaster has a unique case design inspired by the angular lines of the Tesla Cybertruck, giving it a sturdy “toolish” appearance and nailing the 40mm sweet spot. It’s dropping lug configuration also tucks nicely around the wrist at only 46mm, making it a comfortable wear. The bezel has a thick coin-edge with a tight 120-click action and the watch sports an easy-grip, well-proportioned crown. I might also add that the PVD finish has a nice matte texture.

The crystal is a slightly domed AR-coated sapphire with a matching bezel insert. Beneath that is a beautiful brushed dial called Emerald Lake. The colour seen here, which is a grey-green, or moss, reminds me of glacial tarns like Moraine or Louise in the Canadian Rockies. However, there are two other colourways available–Toronto Street Sign Blue and Gastown Black (which also has an “open heart” feature). The applied indices and the dauphine-styled hands–like the case itself–have been custom designed for the Parkingmaster. Both have been generously lumed with BGW9, as have the bezel markers.

The engine in the Parkingmaster is not Tesla’s Roadster 2.0, but it is the handy NH38–the non-date cousin to the ubiquitous NH35. As with the NH35, you get a 41-hour power reserve which ticks at 21600bph.

Flip the watch over and you will find a custom-engraved escape wheel with a wild boar (the owner’s lucky animal) at its centre–as well as a reminder that the watch has been “designed for parking countdown”.

Legend has it that the idea behind the Parkingmaster came to LV after watching a YouTube video where a woman mentioned that she used her bezel to time parking meters. Of course, the majority of dive watches sold today never do anything more adventurous than “desk diving,” so why not repurpose the appendix? While the Parkingmaster bezel appears, and functions, more-or-less like a traditional dive bezel, it does have a “red zone” indicating that you should return to your car and feed the meter. I think that this cheeky addition would also function nicely as a wily wink among other watch enthusiasts.

Some will take issue with the 100m of water resistance. But if you have read my other reviews, you know where I stand on this topic. The ISO 6425 minimum standard is 100m. Recreational divers rarely descend beyond 30m. The Hamilton Khaki Navy Scuba, the Seiko 5 Sports, and the Oris Divers Sixty-Five are just some of the great 100m diver watches. And unlike the Seiko 5 Sports, the Parkingmaster has a screwed-down crown. Don’t believe the hype.

However, I do have a small complaint about the strap. While I certainly have no problem wearing leather on a dive watch, I think the primary band should be submersible (sorry, Rado). To be fair, the first 80 preorders will also receive a free khaki NATO. But throw this thing on rubber, and…well, ’nuff said.

While the name and nominal function of the Vanbanner Parkingmaster may seem like a tongue planted firmly in cheek, this watch is no laughing matter. For $198USD, you get a custom-designed case (not to mention indices and hands) with an automatic Seiko movement for less than the price of some fashion watches. In a world saturated with vintage homage (not necessarily a bad thing), the Parkingmaster is something new. It’s an impertinent chuckle, to be sure. But it’s also the real deal. And if you miss out on the pre-order prices, the joke will, ultimately, be on you.

The pre-sale is live now until February 28th. For more information, and to order the Parkingmaster, visit their website.