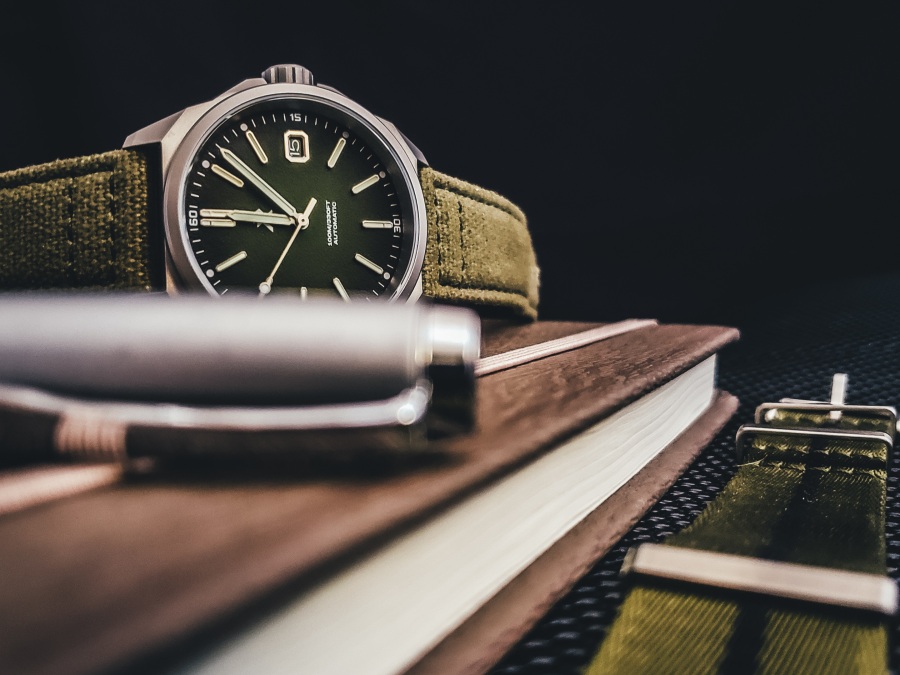 When the RZE Resolute arrived on a Friday afternoon, I threw it on wrist to get a feel for it. I didn’t take it off all weekend. This in no way is meant as a slight to the brand, but I was surprised by just how much I liked it. Dive watches are my wheelhouse. I enjoy a good chronograph. The Resolute doesn’t even have a moving bezel. I expected to appreciate it, but not to love it.

After some thought, I think I know what changed my mind so thoroughly. The Resolute is an example of where “less is more.” In some respects, it is about as simple as a watch can be–three hands on a dial. But whatever the Resolute does, it does very well, and I am hard-pressed to not to think that it is the perfect iteration of a field watch.

Now, I know what you’re thinking. Field watch? It doesn’t even have numerals! Honestly, who cares?

The first thing that strikes you after unboxing the Resolute is the case. To begin, it’s sandblasted titanium and weighs only 65 grams. But it’s the original shape that is most striking. The angular step construction gives it a futuristic appearance. It’s almost as though the case climbs toward the centre like a dais upon which sits a pool of colour in the form of a dial. The edges are clean and sharp. The blasted finishing is flawless. Dare I even say that there is a little of Bulgari’s Octo Finissimo hiding in there? When I first read that the case diameter was 40.5mm, I thought that there was a mistake. The lug design is so thoughtful, and the materials so light, that I was sure the Resolute was a 38mm watch.

Some of the more practical highlights of its construction would be the signed, screwed-down crown and VITON gasket in the caseback, which combine for a 100m water resistance rating. The crystal is flat sapphire and also has an anti-reflective coating.

After the case, it is the dial of the Resolute that is most impressive (and possibly controversial). It is true, as mentioned earlier, it does not use Arabic numerals. This is abnormal for a field watch whose raison d’être is legibility. However, each of the Resolute’s six colourways contrast starkly with its applied indices. Legibility, even in full sun, is not an issue. The distinctive double bar at twelve also helps orient the wearer quickly. In addition, there are minute indicators around the outer edge at the 3, 6, 9, and 12 positions.

The dial itself is lightly textured (the brand refers to it as “sand-textured”) and coloured in a sort of sun burst effect–light in the middle and dark at the bezel. Between the burst and the texture, the dial appears to have real depth.

Uniting these various elements are the hands, which are identical in width and style to the indices and do a lot to balance out the dial. The Resolute is also lumed with both C3 and BGW9 spread out across the markers, indices, and hands, making the watch highly legible, even in the dark.

The Resolute uses the sturdy and reliable Seiko NH35.

RZE founder Travis Tan was also involved in the creation of BOLDR watches. Despite parting ways with his former partner to launch RZE (formerly Reise), Tan has managed to retain some of the design cues that make BOLDR such a popular microbrand. In particular, I refer to the no frills robust construction of the Resolute and the use of quality materials. The titanium employed by RZE is aerospace grade and up to eight times harder than stainless steel. The addition of their ULTRAHex coating system means that it is also virtually scratch-proof. The brand prides itself on sustainable development, mostly because the watches it is creating are built to last for a very long time.

The only thing that would make this watch better than it already is, would be the addition of a bracelet…which already exists. The Ultrahex Titanium Bracelet looks just as rugged and well-designed as the watch itself. Alas, it’s on back order.

With the Resolute, RZE has managed to modernise the field watch with simple design language and rugged good looks. As a daily wearer, it’s a no-brainer–tough, lightweight, and comfortable on wrist. Throw it on a parachute strap and you won’t even know it is there. But you’ll want to keep looking at it anyway. Only once you have the watch up close and in your hands will you begin to truly appreciate all of its facets and three-dimensional attention to detail.

The Resolute retails for $399USD. For more information, check out their website. RZE is also taking pre-orders on their first diver, the Endeavour.

4 thoughts on “Off the Cuff: RZE Resolute”