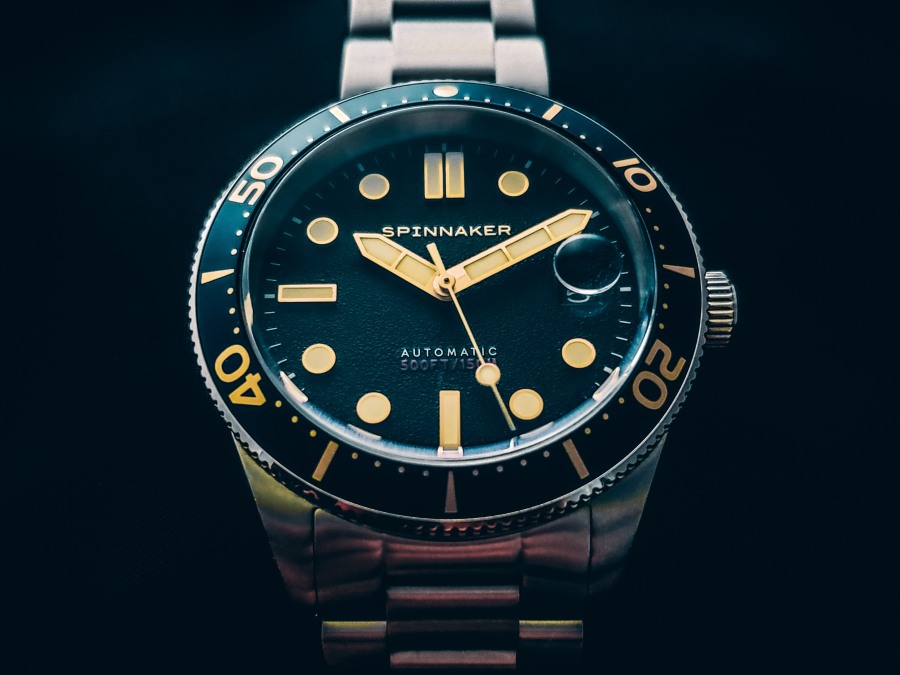 The entry-level dive watch market is a fierce one. It’s the bread and butter of the microbrand realm, but it is also populated by giants like Orient, Seiko, and even Casio. For the enthusiast, it’s an embarrassment of riches. For the brand, it’s a crowded house.

Spinnaker, producing watches since 2015, has done increasingly well to be heard above the din.

The newly released Croft Mid-Size is a prime example. It takes the vintage-styling of its original Croft and reduces it by 3mm, to a trendy and comfortable 40mm diameter. This marks a departure for the watchmaker, whose previous offerings tended to be north of 42mm, for the most part. However, it is a shift that belies an understanding of the changing marketplace and an ability to quickly adapt.

By removing the small seconds dial and, in some respect, upgrading the movement to a hacking Seiko NH35, Spinnaker have been able to retain the overall design language of its popular Croft line, while providing a sleeker, more compact, and arguably more modern diver.

The case and bracelet of the Croft Mid-Size are largely brushed, giving the watch an overall toolish appearance. However, there is a polished chamfer separating the top of the watch from its sides. The knurled bezel, too, is polished–as is the tip of the signed crown.

The model shown here is Regimental Blue–a colour used on both its aluminium bezel and textured dial. I find the colour and the satin finish on the bezel insert to be particularly attractive in the light. Elevating the watch somewhat, as well, are the gold-coloured numerals and gilt applied markers. The same gilt appears on the hands and in the printed brand name on the dial. The juxtaposition of brushed steel and gilt works quite well, and is somewhat reminiscent of the BB58–as is the skin diver-inspired case shape, with its large unprotected crown. The markers and hands have been treated with C3 Super-LumiNova.

The sapphire crystal, while flat, sits proud of the bezel, and is slightly beveled, giving the watch the illusion of a dome. It is AR coated and fitted with a cyclops eye over the date window. The bracelet is solid stainless steel and fully articulating. It also has a push-button clasp with a fold-over keeper and diver’s extension.

The screwed down caseback and matching crown, provide the Croft Mid-Size with 150m of water resistance. The timepiece is also available in Anchor Black, Nomad Green, and Elemental, which has Pepsi-style bezel.

Spinnaker is part of the Dartmouth Brands stable, which includes AV-8, Earnshaw, CCCP, DUFA, and others. As such, they have manufacturing partners in Germany, Hong Kong, the UK, and even Switzerland. While such a business model certainly pushes the “microbrand” label, this diversification and scale certainly play into the company’s capacity to produce affordable, well-built timepieces. It also allows each brand to hone in on a particular aesthetic and type of watch. AV-8, for example, specialize in the pilot watch, while Spinnaker focus on a nautical heritage.

Lacking the history of the more established brands, Spinnaker does a good job of resurrecting obscure moments and personalities from the past–in the form of tribute watches–to instil their pieces with character and flavour. The Croft Mid-Size, like the original Croft, references the 1967 accomplishment of a US Navy diving instructor by the name of Robert Croft–who became the first man to ever free dive (without an air tank) beyond a depth of 200 feet. Ultimately, the vintage, skin-diver styling of the Croft, fits well with the man and the moment they are meant to celebrate.

The water resistance rating on the Croft (150m) is an odd one. It harkens back to watches like the original Seiko Diver (1965). I don’t see it as an issue. Competent, modern, and more expensive dive watches like the Hamilton Khaki Navy and the Oris Divers Sixty-Five are only rated to 100m. However, the rating of 150m, and not, say 200m, is an interesting design choice. If there is room for improvement, it would be in the bracelet clasp, which is stamped metal and not milled, with the diver’s extension being the weakest point.

The Croft Mid-Size is a complete package. It ticks all the boxes. For a watch that starts at 280USD, you would be hard-pressed to find complaint. Despite its vintage styling, the fit and finish are entirely modern. Its brushing is uniform. Its polished edges are clean. The bezel snap can be heard across the room and offers no back play. The subdued use of colour and texture are also very contemporary. The choices provide a style and a flair that remains classy. The Regimental Blue variant, in particular ($350USD), with its gilt accents and stainless steel bracelet, transcends the toolwatch category. In the aforementioned “crowded house” of entry-level divers, Spinnaker is throwing elbows with the Croft Mid-Size.

Off The Cuff articles are full-length, hands-on reviews of the watch (or strap…) in question and represent the opinion of the author only. All photos are original, unless specified otherwise. If you would like to have your watch reviewed on this site, contact us here.

Please understand that using any links to products on this site may result in us making money.

6 thoughts on “Off the Cuff: Spinnaker Croft Mid-Size”