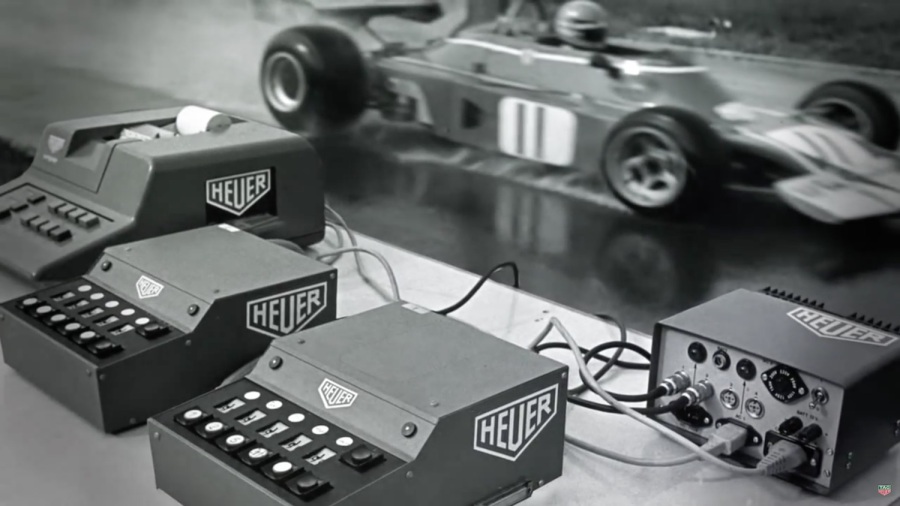 Growing up in a family that is obsessed with motorsport is both a blessing and a curse. It’s a blessing in the sense that once you fall in love with racing, it is constantly in your blood and everyday life. However, it is a curse once you get into it and start noticing all the luxury timepiece advertisements around the track and ask yourself what a TAGHeuer or a Rolex is. Once I opened Pandora’s box, I fell into this never-ending hole of horological history in motorsport…but where did watches start to play a role in racing?

The brand with the most extensive history linked to motorsport is none other than TAGHeuer. We’re going to do a quick recap of their history and get into this.

Heuer’s automotive heritage began in 1911 after receiving a patent to create their first dashboard chronograph–the “Time of Trip”–designed for use in automobiles and aircraft. As the demand for increased timekeeping accuracy grew (sporting events, aviation companies, and various other industries)–including calls for an instrument that could measure hundredths of seconds–in 1916, Heuer created and released the Mikrograph. Fast forward to 1933, and Heuer releases the Heuer Autavia, a dashboard timer for automobiles and aviation, thus providing the collection with its name (AUTomotive and AVIAtion.) However, the Autavia is just one of many collections that the fastest men in the world have worn.

What sparked the racing flame for the brand was Jack Heuer’s 1958 participation in a rally race in his home country, Switzerland. Given the duty of co-driver, Jack put his team in the lead with precise map reading and instruction but misread the dashboard timer by over one minute, which cost them 1st place. They ended the race in 3rd. Upon returning to the Heuer home, Jack, upset with the results from the rally, began to work on a larger and more legible stopwatch chronograph for the inside of a race car. Thus, the TAGHeuer Monaco was born.

What followed was a string of motorsport contributions. In 1963, TAGHeuer would release a watch targeting the dangers and speed of motorsports with the Carerra chronograph. In the 1970s, the Carerra would join the Autavia and the Monaco (often displayed in pictures of Steve McQueen) as the first automatic chronographs for the brand. Heuer would also make a name for themselves in Formula One when their electronics division created a timing system for Ferrari in 1971. This development would begin to cement their reputation in motorsports.

As time progressed (no pun intended), Heuer’s timepieces were worn by some of the world’s best drivers: Mario Andretti, Clay Regazzoni, Niki Lauda, Jochen Rindt and Ayrton Senna, to name a few. In fact, Senna was a significant contributor to the bracelet design of the Heuer S/el, as it was his everyday watch. In 1999, it would be renamed the “link,” owing to its unique design, and would stay prominent through the 90s and early 2000s.

The timepieces that Heuer creates today still hold true to their motorsport roots. The Carerra, the Autavia, and the Monaco remain TAGHeuer staples, albeit with updated materials, movements, and aesthetic choices. Still, it doesn’t take away from the iconic design and history that each timepiece engenders.

Heuer. So much history from a brand, and from a man, who began a racing heritage with a simple fix–a matter of convenience for himself, and others. Heuer’s impact on the racing world was significant and generated many connections between the world of horology and motorsport. A prominent sponsor, supplier, and technological innovator, with not only timepieces, but other electronic and mechanical instruments, Heuer solidified the brand’s ties with everything motorsport.

Born into a family obsessed with motorsport, Tyler Frederick became enamoured with speed and beautiful cars at a young age. His love of Formula 1–and all things mechanical–eventually lead him to horology. Tyler also writes for Montres Publiques and his own website, the aptly named, Horology Obsessed.

Other Watchy Bits include op-ed pieces and articles of general interest. We’d love to hear your opinion in the comments section below.

Please understand that using any links to products on this site may result in us making money.