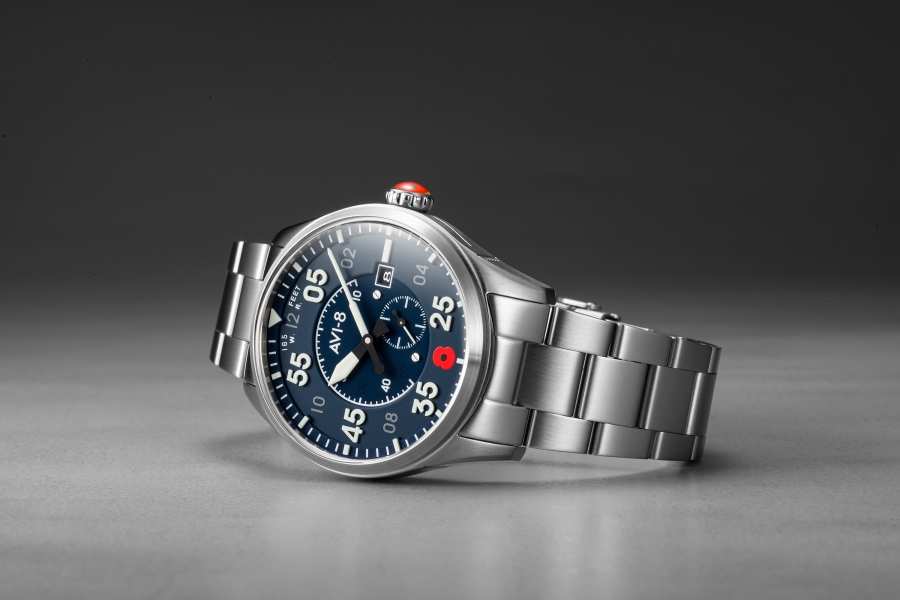 AVI-8 just announced the launch of a very special timepiece: The Spitfire Type 300 Automatic Royal British Legion. The watch, limited to only 500 pieces, is the brand’s way of commemorating the Legion’s Centenary this year. A portion of the proceeds (£25) from the sale of each watch will be used to help the charitable organization, who offer support to veterans and current members of the British Armed Forces.

Ben France, Head of Corporate Partnerships with the Legion said, “We are delighted to be working in partnership with AVI-8 and are incredibly grateful for their support. The limited-edition timepiece is a wonderful way to mark this significant moment for the Royal British Legion, when we are celebrating 100 years of supporting the Armed Forces community. The funds raised from sales of the timepiece will ensure we can continue to provide life-long support to all serving and ex-serving personnel and their families.”

During the darkest days in the Brittle of Britain, Winston Churchill declared to Major General Hastings Ismay, “Never in the history of mankind has so much been owed by so many to so few.” Churchill was referring to the courage and accomplishments of the RAF, who were locked in deadly battle with the Luftwaffe, staving off a full-scale invasion. In the summer of 1940, many of these “few” were piloting the Supermarine Spitfire.

The design of the Spitfire Type 300, by Avi-8, harkens back to this famous interceptor. Its dial provides the same rugged legibility of the plane’s instrument panel, while its handset and small seconds recall the readouts and gauges. This Limited Edition sports the two-petaled poppy—long a symbol of the British Legion—in the six position.

The case is 42mm in diameter and aerodynamically fashioned in an elliptical form with tapering chamfered lugs to echo the silhouette of the aircraft. Sapphire glass caps both the front and its exhibition caseback, which provides a glorious view of the Miyota 8218 and its custom rotor—a replica of the Spitfire, complete with wing roundels. The large crown is capped with a second poppy; this one is suspended in epoxy. The watch is water resistant to 50m.

The Spitfire Type 300 British Legion will come on a stainless-steel bracelet with deployant clasp. Each piece will be individually numbered and arrive in a custom blue and red gift box, reminiscent of the Royal British Legion’s official colours.

The Avi-8 Spitfire Type 300 Royal British Legion is an attractive timepiece. Given its custom touches–the two-petaled poppies at six and on the crown, its stylish rotor–and the fact that it is a Limited Edition, it is not difficult to justify the price ($385USD/ £295) of which a portion will go to a charity. Kudos to Avi-8 for undertaking this worthy project and producing such a stylish pilot watch to commemorate this important event. Shipping starts May 31st, 2021.

On Spec articles refer to upcoming projects and rely upon available information on Kickstarter, the brand website, and promotional materials provided by the watchmaker. An On Spec article does not preclude a future full-length review in our Off The Cuff section. If you would like your project to feature in On Spec, please contact us here.

3 thoughts on “On Spec: The Spitfire Type 300 Royal British Legion by Avi-8”